When my mother-in-law told us she wanted us to accompany her on a trip for her 60th birthday, we all began planning on where to go and what to do. Top of our list was Vietnam and Cambodia but after some extensive research by my MIL, she wasn’t comfortable with making that trip. When crunch time came, B said “if you could go anywhere, regardless of cost, where would it be?” – Her response… “The Galapagos”.

To get to the Galapagos alone can be costly. There are no flights to the islands outside of Ecuador so you must first make your way to Quito or Guayaquil. From there, most people tour the islands via an organized cruise. Average cost of these run you at least $2,100 per person for the most budget-conscious package. Since B and I are neither cruise people nor did we want to drop that kind of dough on a 6 day trip, we proposed another alternative – stay in local hotels and limit our adventure to two key islands. We’d use the taxi boats to get from point A to point B, and eat at local restaurants. 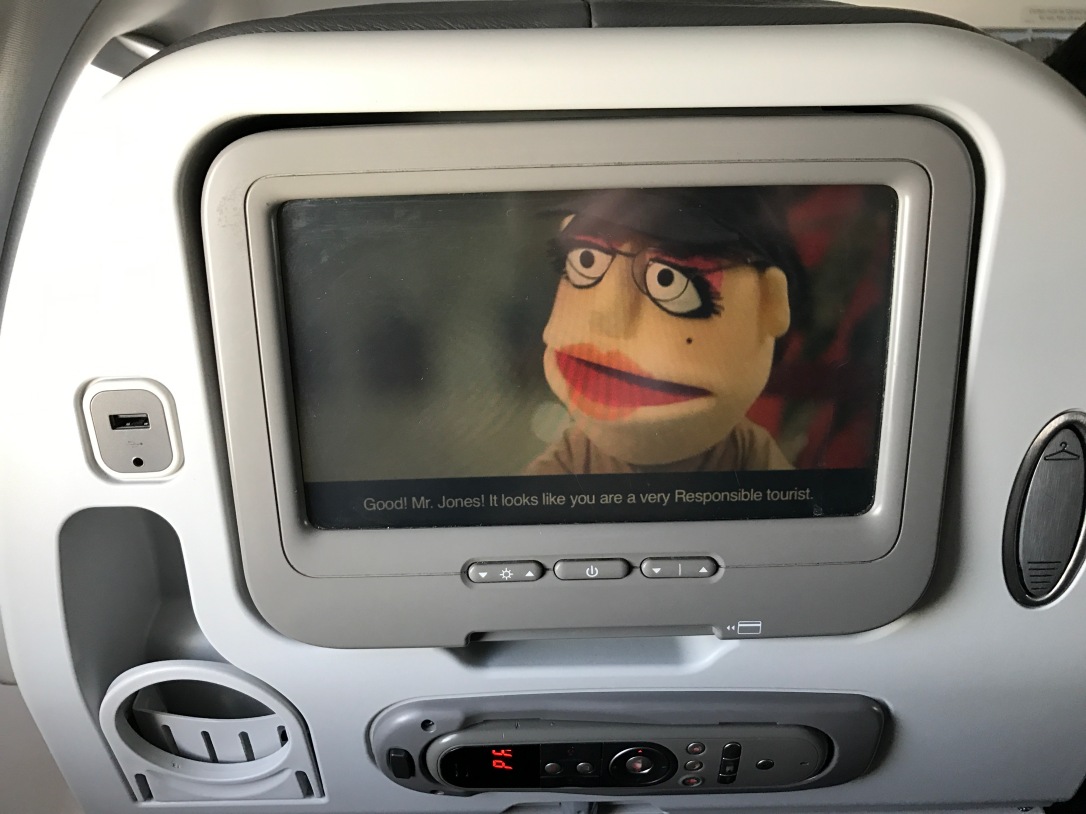 After a brief two day stop over in Quito, we boarded our plane to Baltra. The flight takes just over 2 hours, and as you approach the Galapagos Islands, you’re played an instructional video on what to do and not do while visiting the islands. This includes appropriate distances between you and the animals, disposing of garbage, and how to minimize your footprint while exploring. When you land in Baltra, there’s a fee to enter ($100 USD) and from there, a bus takes you to the ferry which transports everyone from the airport island to the main island of Santa Cruz.

The main town of Puerto Ayora is an hour away from the airport and buses run based on flights in and out. If you miss the bus, like we did, you can expect a LONG wait before another one arrives. If you’re lucky, you’ll already have arranged transport, which we didn’t, otherwise you can arrange to have someone come in from town. After waiting in the hot, unsheltered sun, we opted to call in a ride. 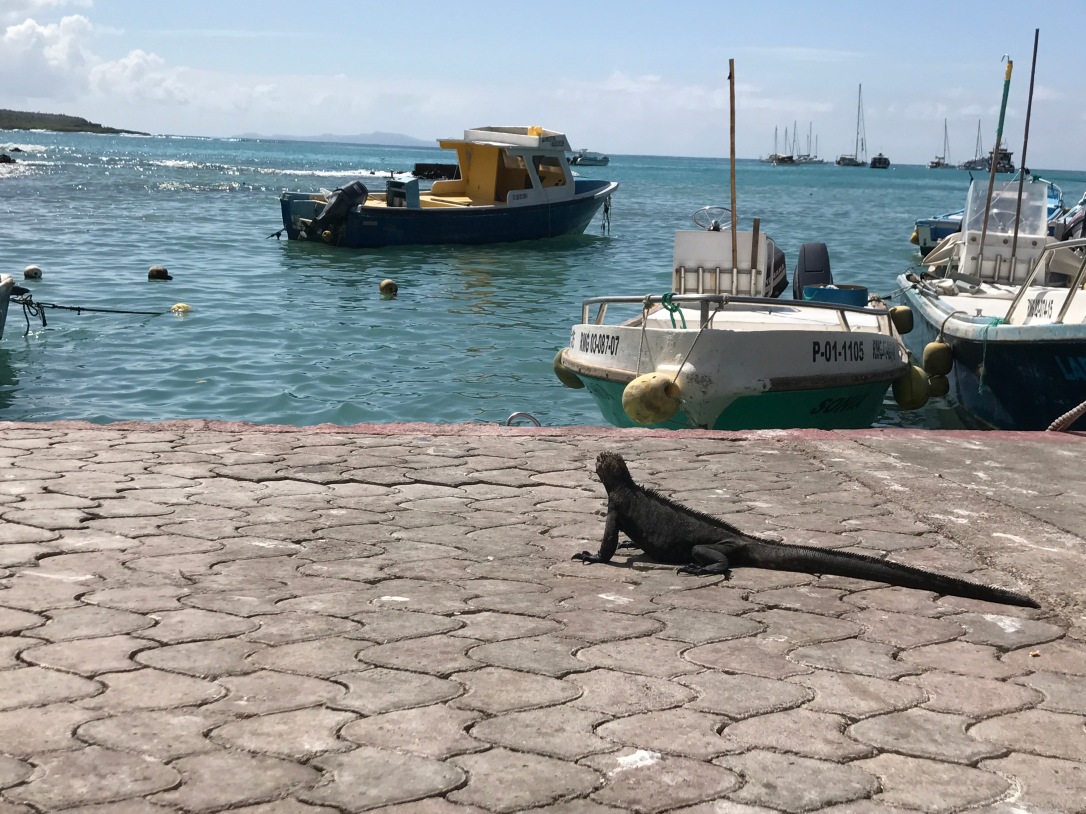 Puerto Ayora is a very walkable town, situated along the water and packed with restaurants, cafes, gift shops, and tour operators. Within walking distance of the town is the Charles Darwin Research Station, where people from all over the world come to study and promote environmental education. We spent a few hours exploring the centre and could have spent more time if our day had permitted but with the heat and it being lunch, it was time to head back into town. Another popular destination just outside of town is Tortuga Bay. It’s quite a trek between the town and the beach so bring plenty of water, but in the end, it’s worth it. The beach is vast and beautiful. On one side, there’s plenty of waves, but as you walk along, you come to a secluded little piece of paradise. Here the water is more calm and is not only popular with the locals, but with iguanas too.

After a few days relaxing in PA, we set sail to our next destination: Puerto Villamil on Isla Isabella. Home to the Galapagos Penguin, Blue Footed Boobies, and Sally-Lightfoot crabs just to name a few, Isla Isabella is an animal lovers paradise. Much more undeveloped compared to neighbouring Santa Cruz, but with still plenty to do. Here we spent much of our time snorkeling with sea lions, relaxing by the beach, and exploring the little town of PV.

Outside of PV is the Wall of Tears. After WW2, Ecuadorian prisoners were shipped to Isabella and the island served as a sort of prison. In the beating heat, these exiles were instructed to do useless tasks, one of which was to build this wall… a wall which served no purpose other than to torture those who built it. It’s only a 5 km hike or bike, but there are a lot of things to distract you along the way. If you take a bike, be prepared for a hilly ride and bring lots of water. If you choose to stop along the way, there are bike racks. The best part of PV is the unspoiledness of the surroundings. Sure, there are people, and there is clearly life there, but it’s much quieter and underdeveloped than the main island – which means you really do see more animals out in the wild. 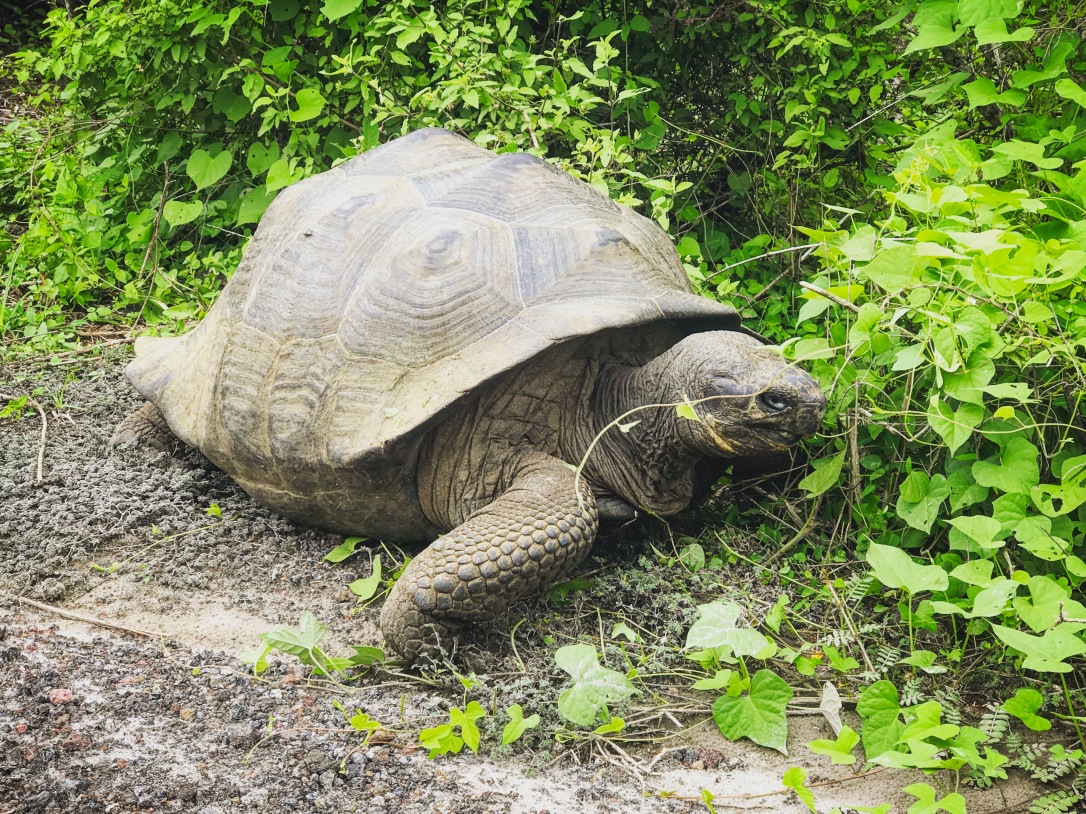 To get between islands, you have a few choices. There are the ferries, which are small boats that carry more power than you’d expect. They’re rough… and I do mean rough. As a girl who grew up on the water, and in boats, I even had a hard time sitting in my seat as we bounced around for the duration of our transport. If you’re not a fan of boats, or have a hard time keeping down your cookies, there are small planes that travel between the islands. Since B is more of a flyer than I am (I hate flying), he and his mom took the plane back to Santa Cruz while I stuck to the boat. Either way, you’re in for an adventure.

In the end, our trip to the Galapagos didn’t break the bank. Our hotels ran us about $130 per night (we stayed for 6 nights), our meals ran us anywhere between $7 – $15, beer on the islands was about $3, transportation (all in) cost under $200. In the end, it was much more economical, adventurous, and well worth the effort to see penguins in the wild.

30-something wonderlust cat mom trying to make it in this crazy world. I have a short attention span and change my mind like Katy Perry changes her hair colour. (And I’m Canadian… I spell colour with a “u”) View all posts by Laura Ashleigh