Up ahead are white dusted tipped mountains, down below are valleys, and I’m somewhere in the middle, driving along twisty mountain roads in Bosnia and Herzegovina. Although I’ve never been in this part of the world before, I find it strangely familiar. It’s as if all of the cities and all of the countries I’ve traveled before have mashed together before my eyes and I’m in a place that I’m familiar with.

As we make our way down the twisty mountain roads towards Mostar, I’m taken back to my childhood. To a time where I hated road trips. It’s likely due to the fact that as an only child in the early 90s, I grew bored with them. On any given Sunday, my grandparents (who raised me and I love dearly), found entertainment in the 3 hour drive around the world’s famous Cabot Trail. As a nine year old, I did not. I joined because 1 – I was forced to, and 2 – I thought that by agreeing with little fuss, I’d get an ice cream cone in Cheticamp out of the deal. Sometimes I was lucky, other times my hopes faded when I realized that the ice cream shop was closed for the season.

Before we make our way to Mostar, we stop briefly in Medjugorje, a small town near the Croatian border which has been an unofficial pilgrimage place for Christians since the Virgin Mary allegedly appeared on Apparition Hill in 1981. It’s a place where my French, Catholic grandmother would have aspired to visit if she was a fan of traveling – which she’s not. All of the little gift shops are jammed with empty bottles for tourists to fill with Holy Water, postcards with the Virgin Mary, and other religious knick-knacks to stock up on. But what’s really magical about this place is the church. While I don’t believe in a higher power, I admire those who do. Seeing the masses of people who have traveled from far and wide to attend mass in the St. James Church was magical. After some tea and walking the main strip, we’re on the road again, heading towards Mostar. 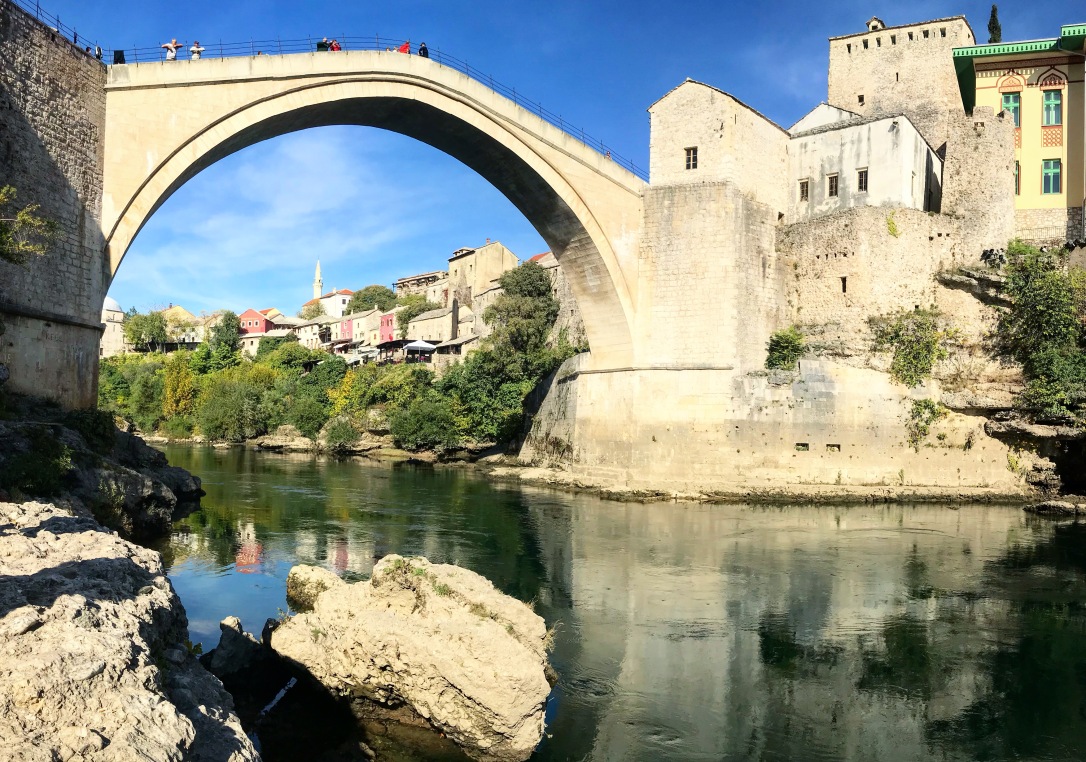 Mostar is named after its famous bridge, or by those who historically guarded it I should say. Walking through its streets filled with small stalls, you’d never realize that just a short time ago, the city was heavily destroyed in the Siege of Mostar, and since then, the city has been working to rebuild – but the effects of the war can still be seen. According to a tour guide that I overheard near the entrance of the market, Mostar has a 40% unemployment rate, but the city is working to fix that and a hotel that once welcomed many to the city before the war, will be opening again next year, employing hundreds of people. While things are looking up, there are signs placed around the city with the simple message “Don’t Forget”. It sends a powerful message even among the bustle of restaurants, cafes, gift shops, and flocks of tourists of the county’s bloody past.

The bridge jumpers, young men who take payment from tourists to jump from the centre of the Stari Most bridge (24m high), take the plunge into the frigid waters below. I wasn’t sure if there would be any present since it was the end of October, but there were two. Neither of which I had the opportunity to see do the jump. I’m sure there are many more during the summer months.

While I only had a small taste of Bosnia and Herzegovina, it left me wanting more. My curiousity has been peaked and now, after just a week being back in Canada, I’m already looking at ways to go back! To anyone traveling to Croatia, consider Bosnia and Herzegovina as a side trip. It’s very accessible from both Dubrovnik (2.5 hrs) and Split (a little over 2 hrs).

30-something wonderlust cat mom trying to make it in this crazy world. I have a short attention span and change my mind like Katy Perry changes her hair colour. (And I’m Canadian… I spell colour with a “u”) View all posts by Laura Ashleigh

2 thoughts on “A day in Mostar, Bosnia & Herzegovina”